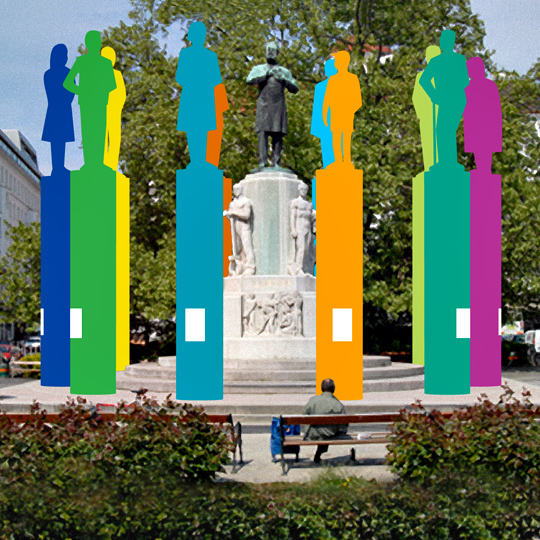 The argument for transforming this statue is compelling and unarguable, but this is not the case for everyone. We therefore considered accessible, contemporary ways to alter its meaning that could not be criticised as vandalism. Our proposal leaves the current statue intact. A series of simplified figures, on plinths at the same level as the original statue, encircle it. Each figure looks at Lueger, challenging him. Men, women, children; young and old - each represents a Viennese resident from an immigrant family to simultaneously celebrate diversity and foreground what is common to us all.

We are a London-based team of designers, called Lucienne Roberts. Our objective is to ally a commitment to accessible and engaging design with a socially aware agenda. Projects include exhibition design for The British Museum, St Paul's Cathedral and the Wien Museum. In 2000 Lucienne was a signatory of the First Things First manifesto, which calls for an awareness of design responsibility. Her most recent book, Good: An Introduction to Ethics in Graphic Design, was published in 2007. Lucienne has a personal interest in this project as her maternal family were Jewish immigrants to Vienna.